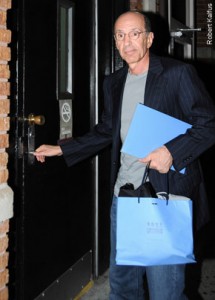 Infamous insider trader Sam Waksal, aka the “Martha Stewart Guy,” is now out of federal prison and residing at the Bronx Community Re-entry Center half-way house.   Waksal is the founder of the company ImClone, and allegedly tipped off Martha Stewart when his company’s stock was about to tank in 2001.

The NY Post reports that Waksal “just enjoyed a luxurious weekend furlough from his new home at a Bronx halfway house – a perk that angered his fellow residents, sources said.”

A source at the 120-inmate halfway house confirmed that Waksal, who is referred to as the “Martha Stewart guy,” arrived Thursday and promptly got VIP treatment.

“They blocked off the whole reception area just for him,” the source said, adding that most inmates wait hours to be processed. “Then the director told everyone else that they can’t talk to reporters about him.”

After a night in the center – he shared a room with another con on the second floor – Waksal was sprung for the weekend. He was picked up in a SUV on Friday and didn’t return until Sunday.

He was spotted returning again to the building at around 8:30 last night after a day out, toting a shopping bag from Smythson, an exclusive British stationery and leather-goods store on West 57th Street.

“He’s got money, so he gets to do what he wants,” the source said.