Getting the “Last Laugh” on the SEC, the Hard Way

As I discuss in this post on my Enforcement Action blog over at Compliance Week, sometimes getting the “last laugh” on the SEC isn’t all that it’s cracked up to be.

Charles J. Clark, most recently chief counsel of litigation at Capital One Financial Corp., and a former Assistant Director in the SEC’s Division of Enforcement, has joined Kirkland & Ellis as a partner in the firm’s Washington office. The firm announced that Clark will join its white collar defense and securities enforcement practice. Clark served […]

What Happens to D&O Coverage if AIG Goes Under?

by Bruce Carton What happens to D&O coverage if AIG goes under? The short answer is that I don’t know and I’m looking for answers over at my Enforcement Action blog at Compliance Week.   Please weigh in there if you have any insights.

If you would like receive a single daily email alert from Securities Docket providing you with updates on every new post from the previous day, please click here to sign up or simply visit the “Subscribe by email” link that is in the upper right-hand corner of each page on Securities Docket. Of course, if […]

Events: “The Subprime Mortgage Crisis: From A to Z” Conference Begins Thursday

Talk about timing.  As noted in our Events section (see the tab at the very top of the page), ALI-ABA’s conference entitled “The Subprime Mortgage Crisis: From A to Z” begins on Thursday in Washington, DC.   Do you think they’ll be able to find anything to talk about?

In India last week, the Supreme Court upheld a sectoral tribunal’s ruling that found the CFO of Wockhardt, Rajiv B. Gandhi, and others guilty of insider trading.  The court rejected Gandhi’s plea challenging the judgment of the Securities Appellate Tribunal, which had in turn refused to set aside a penalty imposed by the Securities and […]

The “Directorship 100,” which seeks to identify the 100 “Most Influential People on Corporate Governance and in the Boardroom,” was announced yesterday, and it includes many individuals who are key figures in the securities litigation and enforcement arena, as well.  The list includes: Christopher Cox, Chairman of the SEC Mary Shapiro, CEO of FINRA Robert […]

Natural Health Trends Corp. (BHIP) announced yesterday that the SEC has completed its investigation of the company and others and notified the company by letter dated September 12, 2008, that it does not intend to recommend any enforcement action against the company itself. On September 4, 2008, the SEC announced that it filed settled enforcement […] 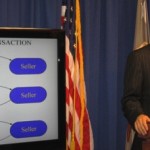