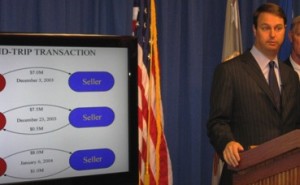 Yesterday, the SEC charged American Italian Pasta Company (AIPC) and certain former senior executives with engaging in a fraudulent accounting scheme to artificially increase the company’s stock price and mislead investors about the company’s earnings. Named in the complaint are former CEO Timothy S. Webster, former CFO Warren B. Schmidgall, and former executive VP of Corporate Development and Strategy David E. Watson. Webster agreed to pay more than $1 million to settle the SEC’s charges, and the case against Schmidgall and Watson is ongoing.

The SEC also announced yesterday that in a related criminal action, the investigation by the U.S. Attorney’s Office for the Western District of Missouri has resulted in Webster and Schmidgall both pleading guilty to one count of conspiracy to commit wire fraud for their roles in concealing AIPC’s true financial condition and filing materially false reports with the SEC. The company itself agreed to resolve the criminal investigation by paying a $7.5 million penalty.