As discussed here, Bill Lerach put his “minimum-security” status in jeopardy recently when he allegedly offered a corrections officer the use of his San Diego Chargers season tickets.  Lerach was reportedly about to be the subject of a formal administrative proceeding on the matter which could have, if it went against him, led to his being placed in a higher-security facility.

So a week or so later, the question is:  Where’s William? 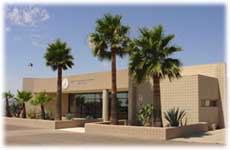 Thanks to the Federal Bureau of Prison’s Inmate Locator, we see that one “William Lerach, Register #46683-112, age 62, White, Male, Projected Release Date 03-08-2010” is now located at the Federal Correctional Institution in Phoenix, Arizona, a “medium security facility for male offenders.”

Cal Law’s Legal Pad explains that the Phoenix institution is “two notches of security above where Lerach had been originally assigned: the fence-less men’s camp at Lompoc, outside Santa Barbara. Medium-security prisons ‘have strengthened perimeters (often double fences with electronic detection systems)’ and ‘mostly cell-type housing.'”