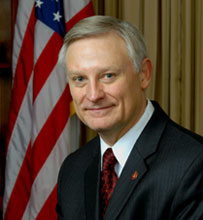 Spencer Bachus of Alabama, the top Republican on the House Financial Services Committee, is under criticism for his active trading of stock options in 2007, including a single transaction on Dec. 10 in which he made approximately $15,000.  He’d held that particular investment for just two weeks, and sold it on the same day that the company, Focus Media Holding Ltd., surged following its announcement that it would acquire a competitor, according to the Associated Press.

Bachus reportedly made dozens of trades in 2007, sometimes making several several trades in the same week.  His trading allowed him to supplement his $165,200 annual congressional salary with up to $160,000 for the year.

Legal experts were troubled by Bachus’ trading.  Mercer Bullard, a securities law professor at the University of Mississippi and a former attorney with the SEC was quoted as saying:  “Is he working for the American people or working on his securities accounts? …. I think it’s totally inappropriate … you cannot as a member of the House Financial Services Committee provide a truly unconflicted point of view if you are actively trading in the markets.”

Duke law professor James Cox agreed, stating that “The problem is that the temptations are just too great….  We get very upset about baseball players and other sports players who gamble … because we’re worried about the temptation that they might bet on their own games. I think this is the same problem.”  Cox added, “If he were my representative in Congress, I would be irritated that he has the time to do this.”

Most of Bachus’ trades in 2007 were reportedly were short-term puts or calls.