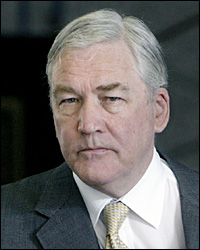 Black was convicted in July 2007 conviction for his role in the theft of $6.1 million from Hollinger.  The court ruled that “A reasonable factfinder could only conclude that it is substantially likely that a reasonable investor would view $6,100,000 in unauthorized payments to officers and directors as significantly altering the total mix of information available.”

According to Alex Bourelly, Black’s attorney in the case, the parties are continuing to exchange evidence in preparation for trial on remaining SEC allegations against Black, and no date for that trial has been set.