The Shareholder Communications Coalition announced yesterday the creation of a new website, http://www.shareholdercoalition.com, as a part of mission to “inform the general public and Washington policymakers about significant challenges in the current system used by investors to vote their shares in corporate elections.” The Coalition is made up of five associations: Business Roundtable, National Association […] 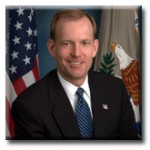 McGregor Scott, U.S. Attorney for the Eastern District of California, will join Orrick Herrington & Sutcliffe as a partner in its Sacramento office when he leaves the government in January.  The Sacramento Business Journal reports that Scott will start a white collar crime practice for Orrick in Sacramento, working closely with counterparts in San Francisco […]

Record 30 IPOs Valued at Over $13 Billion Withdrawn in October

According to data from Dealogic, the month of October 2008 saw the greatest volume of withdrawn IPOs for a single month since the firm began gathering data in 1995.  Dealbook reports that a total of 30 IPOs valued at $13.1 billion were pulled worldwide in October. Among the planned offerings withdrawn this month is the […]

Deloitte has sued Thomas P. Flanagan, a 30-year partner in the firm, for allegedly trading on inside information he received from audits and lying about it for years.  Courthouse News reports that Deloitte filed its case in Chancery Court in Delaware. According to the Courthouse News article, Flanagan “for 30 years was a partner” in […]

Part II of my interview with Jonathan Sokobin, Director of the SEC’s Office of Risk Assessment, is now available on my Enforcement Action blog over at Compliance Week (click here). Part II addresses why some at the agency believe Lynn Turner’s recent criticism of the SEC in his Congressional testimony was gratuitous, as well as […]

The SEC announced today that it has filed a motion in its case against Adelphia Communications Corp. seeking an order authorizing the distribution of $95 million plus accrued interest (the “SEC Fund”).  The SEC Fund is currently being held in the court’s registry pursuant to the procedures adopted by the DOJ with respect to the […]

“Chris Cox is Facing a Nightmare”

Interesting quote from former SEC Chairman Harvey Pitt: “Chris Cox is facing a nightmare. I thought I was facing a nightmare when I was chairman during the Sept. 11 attacks; that was a walk in the park compared to what Chris is facing now.” The quote is part of a post by Compliance Week Editor […]

David Wilson has joined Thompson Hine as a partner in its Washington, DC office, the firm announced yesterday.  Mr. Wilson joins the firm’s Business Litigation and Competition, Antitrust and White-Collar Crime practice groups.  He was formerly a partner with Wilmer Cutler, where he worked for 19 years, according to the Legal Times. Mr. Wilson focuses […]