The SEC is investigating the origin of a false report on a CNN “citizen journalist” website called iReport that claimed that Apple CEO Steve Jobs had a heart attack and was hospitalized, Bloomberg reports.  The SEC is looking into whether the iReport.com post was intended to manipulate the price of Apple stock, which fell more than 5% after the false story on iReport was posted and briefly picked up and publicized by other publications.  Apple has reportedly confirmed that the report is “not true.”

The report, which has since been removed from iReport (and a screen shot of which appears below), falsely stated that Jobs was taken away by paramedics after suffering sever chest pains and shortness of breath. 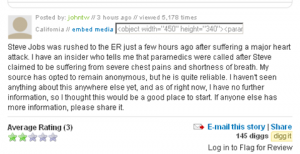 CNET ‘s “Daily Debrief” has a detailed analysis of the entire episode in this video: