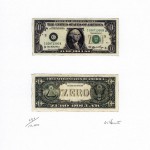 Laura Gilbert, a Manhattan-based artist, has designed “The Zero Dollar” as a statement about what she calls “the current economic calamity.” According to the NY Times, Ms. Gilbert will be handing out signed and numbered originals Tuesday on Wall Street.  To reflect the current crisis in the financial markets, she has tried to lower the […]

PwC Settles Claims Against it in AIG Securities Class Action for $97.5 Million

One day after we discussed the litigation exposure for Big 4 auditors we see that PricewaterhouseCoopers has agreed to pay $97.5 million to settle litigation brought against it in a securities class action led by the Ohio AG’s office in connection with American International Group.  PwC was the auditor for AIG. The Ohio AG’s office […]

Former AUSA Thomas F. Carlucci has joined DLA Piper’s litigation practice as a partner in the firm’s San Francisco office, according to the American Lawyer. Carlucci was an AUSA for more than 10 years in San Francisco, and was previously co-chair of Foley & Lardner’s white-collar defense and corporate compliance practice. In addition, Mr. Carlucci […]

On Friday, a jury acquitted former McAfee general counsel Kent Roberts on mail fraud charges in the criminal trial brought against him concerning misdated stock options.  According to The Recorder, after three days of deliberations, the jury acquitted Roberts on mail fraud charges and couldn’t agree on a false-books-and-records count, leading Judge Marilyn Hall Patel […]