Harold J. Vogel was sentenced Monday to three months in prison for allegedly accepting $2.5 million to serve as a plaintiff in a securities class action lawsuits, according to the AP.  He could have received as much as five years in prison.   Vogel pleaded guilty in April 2007 to one count of making a false […]

The SEC has posted a version of its Enforcement Manual dated October 6, 2008, to its website.  The 122-page Enforcement Manual is filled with important guidance, practices and procedures for the Enforcement staff, and should be read just as carefully by private attorneys who practice in the enforcement area. It contains detailed information on key […]

While 1,681 NYSE-traded stocks were hitting 52-week lows today, one lonely stock hit a 52-week high: Wm. Wrigley Jr. Company (WWY), which had the good fortune to announce today that it had “completed its merger transaction with Mars, Incorporated.  As a result, Wrigley will become a subsidiary of privately held Mars, Incorporated. Under the terms […]

Michael Sommer has joined the law firm of Wilson Sonsini Goodrich & Rosati as a partner in its litigation practice.  WSG&R announced today that Sommer, most recently a partner at McDermott Will & Emery and previously an AUSA for the Southern District of New York, will be based in the firm’s New York office. Sommer’s […]

Lord Goldsmith QC, former attorney general of England and Wales, warned in an interview recently that the coming “avalanche of litigation arising from the credit crisis” may overwhelm the London court system.  Lord Goldsmith, now European chair of litigation at Debevoise & Plimpton, fears that London’s reputation as a top center for the resolution of […] 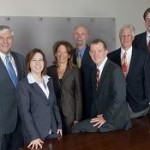 Philip Khinda has joined Steptoe & Johnson as a Securities Enforcement and Litigation Practice partner in its DC office.  Mr. Khinda joins Steptoe from Ropes & Gray, where his practice focused on securities enforcement, corporate governance, and regulatory matters. Mr. Khinda is a former senior counsel with the SEC’s Division of Enforcement.  Prior to joining […]

Two more firms join our growing list of law firms that have formed groups (or task forces!) to respond to the current financial crisis and rescue. Steptoe & Johnson announced on Friday that it has launched a Troubled Asset Task Force, which will “advise financial institutions, sellers and purchasers of assets, asset managers, and program […]

60 Minutes takes a look at the complex but critical subject of credit default swaps, “the arcane Wall Street financial instruments that have magnified the economic crisis,” in this 12 minute video: Watch CBS Videos Online

The UK’s Serious Fraud Office (SFO) has recovered £2.25 million from Balfour Beatty, the UK construction group, following an investigation that allegedly showed inaccurate accounting at an Egyptian joint venture.  The Times Online reports that Balfour Beatty reported the irregularities to the SFO and acknowledged that unlawful conduct took place in its subsidiary, which has […]