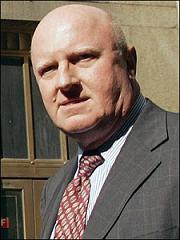 A federal judge in New Hampshire has granted Tyco’s motion to freeze former CEO Dennis Kozlowski’s assets before they can be transferred to his ex-wife as part of a divorce settlement, according to the NJ Star-Ledger. The Star-Ledger reports that it is Tyco’s position that Kozlowski “ginned up the settlement in a bid to shield his money.”

Public statements by the couple’s divorce lawyers raise `’the clear suspicion that the divorce settlement is actually an asset transfer arrangement designed to take assets out of Kozlowski’s name and place them in the hands of a “supporter,” but out of reach of this court and his creditors,’ Tyco said in court documents.

Kozlowski is currently serving a federal prison term of up to 25 years, according to the Star-Ledger.