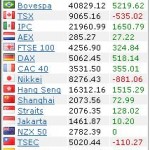 US, World Markets Soar; DJIA Up 936 Points in Biggest One-Day Point Gain Ever

Stocks rallied fiercely Monday afternoon, with the Dow Jones Industrial Average closing 936 points higher.  CNN reports that the 936 point gain was the largest ever during a session on a point basis, and the day’s 11.1% increase in the DJIA was the fourth-best day ever on a percentage basis. The Standard & Poor’s 500 […]

Our running list of law firms launching Financial Crisis practice groups and task forces grows daily.  The latest to add to the list are: Foley & Lardner: Foley launched a Financial Crisis Response Team on September 23, 2008.  The Team “enables corporations, financial service providers, and individuals to understand the implications and opportunities resulting from […]

The Australian Securities and Investments Commission has sued KPMG for $200 million for alleged negligence in auditing collapsed Australian property empire Westpoint Group. The Age reports that the collapse of Westpoint in 2006 cost investors more than $300 million. ASIC brought the case under section 50 of the ASIC Act, which allows it to launch […]

Stanford Law School’s Securities Class Action Clearinghouse is well-known and for years has been an extremely useful information tool for anyone needing detailed information about securities class actions.  Less known, however, is a new website by Stanford Law School called the “Global Class Actions Exchange.” The GCAE contains detailed memoranda from attorneys and scholars from […]

The SEC is reportedly set to announce its second-highest number of enforcement actions ever in 2008, but a record number of “deregistration” cases in 2008 may cast some doubt on the significance are those numbers.  Read the post below on my Enforcement Action blog over at Compliance Week for the details. Read “The SEC’s September […]

As previously discussed here, the high-profile failures of many Big 4 audit clients in the financial sector can mean greater litigation risk and the possible loss of a significant client engagement for auditors.  The collapse of Washington Mutual appears to be presenting both challenges to its auditor, Deloitte. The Puget Sound Business Journal reports that […]

Law firm Gibson, Dunn & Crutcher has published a memorandum regarding the new SEC Enforcement Manual (previously discussed here).  The new manual is an important development and we suspect that the GD&C memo will be the first of many law firm memos to come on this topic. GD&C observes that this “first-ever” manual “memorializes in […]