Securities Docket has just one question for all of you Montanans, North Dakotans, and Wyomingans — where are you?  Playing around with Google Analytics for this publication, we can see that in the first 17 days of October 2008, we have had visitors from no fewer than 64 different countries.  These include the predictable countries, […] 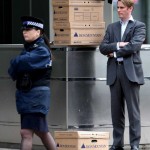 The good news:  It was announced today that investors voted Lehman Brothers equity researchers the best in the business for the sixth consecutive year in Institutional Investor’s 2008 All-America Research Team rankings. The bad news:  You already know.

A report by the anti-bribery working group of the Organisation for Economic Cooperation and Development has harshly criticized Britain for its failure to address corporate corruption and stop bribes paid by companies dealing in foreign markets.  It called for new legislation in the UK to deal with the problem “as a matter of high priority.” […]

The law firm Kirby McInerney has been appointed lead counsel and the New York City Pension Funds as lead plaintiff in two class actions filed against Wachovia Corporation in the Southern District of New York, the firm announced on Wednesday.  The cases allege that Wachovia and its executives misrepresented and failed to disclose Wachovia’s exposure […]

For those of you who are formerly with the SEC’s Division of Enforcement, there is a new SEC Enforcement Alumni Group on Linkedin.com.  Click the logo below for details and to join the group.

On Tuesday, October 14, the U.S. Court of Appeals for the Second Circuit affirmed the denial of class certification in Teamsters Local 445 Freight Div. Pension Fund v. Bombardier Inc. et al. The case was a putative class action arising from the sale of debt securities (Certificates) backed by mobile home loans and leases, and […]