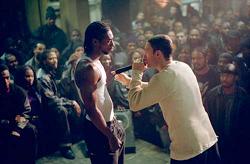 Stop reading now if you did not like (or bother to see) Eminem’s movie “8 Mile.”

Hey … where did everybody go?

OK, for the three of you who are still reading, Joe Weisenthal of Clusterstock has some original advice for the heads of Fannie Mae and Freddie Mac who must testify next month on Capitol Hill.  Noting that these executives will similarly be skewered by Congress if they repeat what Dick Fuld did, Weisenthal offers some wisdom inspired by Eminem’s “Rabbit” character:

Be like Eminem during his triumphant battle rap scene from 8 Mile. During their opening statements, they need to pre-empt the Congressmen with all that they’re going to get lobbed against them. So that when it comes around to questioning, the inquisitors are totally dumbstruck with nothing to say.

Brilliant!  Watch the video for the full flavor (available here, with some R-rated language), but here’s how it works.  You anticipate all the shots you’re going to take and admit every single one of them up front, like Rabbit did.  Here’s how Rabbit handled it in his battle against Papa Doc, with the curse words removed:

This guy aint no ___ MC,
I know everything he’s got to say against me,
I am white, I am a ___ bum, I do live in a trailer with my mom,
My boy Future is an Uncle Tom.
I do got a dumb friend named Cheddar Bob who shoots
himself in the leg with his own gun,
I did get jumped by all 6 of you chumps
And Wink did ____ my girl,
I’m still standin here screamin’ ____ THE FREE WORLD!

Papa Doc was left speechless by Rabbit’s unexpected admissions.  Using this as the roadmap, it is clear that all that the heads of Freddie Mac and Fannie Mae have to do is replace the lines above with whatever the subprime mortgage meltdown equivalent might be, and they, too, will be home free.