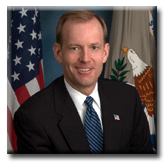 McGregor Scott, U.S. Attorney for the Eastern District of California, will join Orrick Herrington & Sutcliffe as a partner in its Sacramento office when he leaves the government in January.  The Sacramento Business Journal reports that Scott will start a white collar crime practice for Orrick in Sacramento, working closely with counterparts in San Francisco and nationwide. Scott has served as U.S. Attorney for the Eastern District since March 2003.