Taiwan: Son-in-Law of Former President of Taiwan Sentenced to Seven Years in Prison for Insider Trading 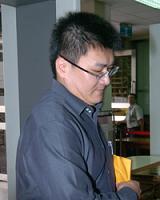 Chao Chien-ming, the son-in-law of former Taiwanese president Chen Shui-bian, appeared in High Court today for the insider trading trial against Chao, his father, and two other defendants.  Taiwan News reports that the High Court sentenced Chao to seven years and Chao’s father to nine years in prison and NT$30 million on charges of violating the Securities and Exchange Act. After the trial, Chao reportedly said that he did not know that his actions constituted insider trading, and that he and his father  planned to appeal their sentences.

According to the article,

Chao was detained in May 2006 following marathon questioning for his alleged role in a snowballing insider trading scandal role involving the shares of Taiwan Development Corp and he was released on bail in July the same year. The court issued a verdict in the first trial on Dec. 27, 2005 and sentence Chao to six years with NT$30 million fine, Chao’s father eight-year sentence with NT$60 million fine, and Su four years and three months sentence.

But, the Supreme Court believed that there were defects found in the previous verdict regarding the amount of money in the insider trading and sent back the case to the lower court.

Therefore, the case was remitted to the high court and today was the Taipei High Court’s remitted trail. The verdict today remained the same as that of the second trial.