On November 24, 2008, Judge P. Kevin Castel of the SDNY dismissed the securities class action against Vodafone for lack of subject matter jurisdiction.  The court relied heavily on the recent Morrison v. National Australia Bank case (discussed here previously), which requires that a court must “identify which action or actions constituted the fraud and directly caused harm … and then determine if that act or those actions emanated from the United States.”

The court found that the US-based conduct alleged by plaintiffs was “limited, and falls short of that found sufficient to premise subject matter jurisdiction.”  It stated: 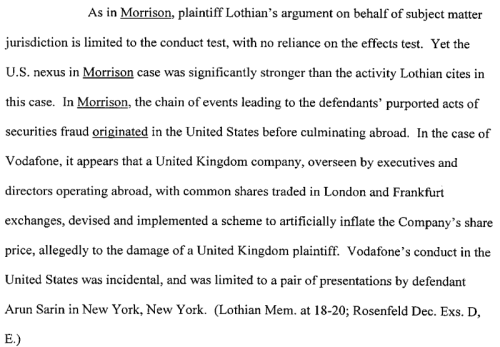 The court concluded that any activity by Vodafone in the US was secondary, and that, as in the Morrison case, “the responsibility for ensuring the accuracy of public statements lies abroad.”

Read the Memorandum and Order in the Vodafone case