Former WorldCom CEO Bernard Ebbers, now serving a 25-year prison sentence for his role in a massive accounting fraud, has petitioning for clemency from President Bush The DOJ stated today that Ebbers has submitted a petition for commutation of his 25-year sentence to the Office of the Pardon Attorney, Reuters reports. Other high-profile financial felons […]

A reader just provided us with a heads up on the First Circuit’s decision in SEC v. Tambone, a copy of which we immediately posted to the Securities Docket News Wire (scroll down homepage a bit, on left).  The opinion is 105 pages long, so it may be some time until a post about it […] 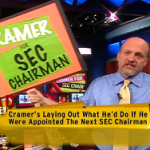 Does Obama watch CNBC?  I guess we’ll find out.  And we’re going to tag this post “Humor” until we hear otherwise! (via Dealbreaker)