Add the “Restacking Project” to the SEC’s List of Challenges 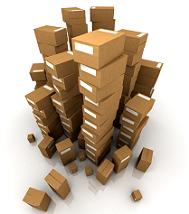 The SEC has countless things that it needs to accomplish right now but its going to need to do so while living out of boxes.  The SEC’s latest challenge is an ill-timed, six-month, $4.1 million “Restacking Project” that involves a  reshuffling of offices for nearly all of the 1,900 SEC employees at its 3-year-old DC headquarters (mainly lawyers and accountants).  The Washington Post reports that at least 170 employees will have to move twice, once to temporary office space for a few months and then to their permanent offices.

The agency’s has created a newsletter for the project (the “Restacker”) and there’s also a hotline number, a help desk in Room 3465, and an e-mail address to handle computer or communications problems.  As Broc Romanek explains today, the Restacking is an attempt to remedy a problem caused by the fact that

When the SEC moved into its new building a few years ago, someone in charge of such things had a not-so-brilliant idea – mix up Staffers from the various Divisions on each floor rather than maintain the Divisions on their own floors. End result of that: folks from the same Division communicated far less with each other because they rarely saw each other (and communication already had been reduced due to the popularity of working from home).