SEC Chairman Christopher Cox stated Tueday evening that he is “deeply troubled” by initial findings that “credible and specific allegations regarding Mr. Madoff’s financial wrongdoing, going back to at least 1999, were repeatedly brought to the attention of SEC staff, but were never recommended to the Commission for action. I am gravely concerned by the […] 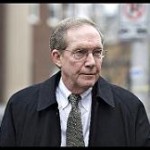 Ronald Ferguson, the former CEO of General Re Corp., was sentenced today to two years in prison and fined $200,000 for his role in a scheme that cost shareholders of AIG more than $500 million.  The AP reports that Ferguson, who was convicted in February of conspiracy, securities fraud, mail fraud and making false statements […]

John Marshall, former vice chairman of the International Securities Exchange, was sentenced on Monday to 18 months in prison for his role in an alleged conspiracy to leak confidential information about the $2.8 billion takeover of the ISE in 2007.  As previously discussed in detail here, Marshall pleaded guilty on September 26, 2008 to one […]

Gary A. Ray, a former Vice President and head of Human Resources at KB Home Corp., has agreed to plead guilty to a conspiracy in 2006 to obstruct justice in connection with an internal investigation into stock option backdating at KB.  The United States Attorney’s Office for the Central District of California announced today that […]

Mark Pomerantz, the SEC’s court-appointed receiver for the law firm Dreier LLP, has advised U.S. District Judge Miriam Cedarbaum of the SDNY that the firm will file for bankruptcy. Bloomberg reports that in a Dec. 11 letter publicly filed yesterday, Pomerantz stated that “I have advised counsel for the SEC and counsel for Mr. Dreier […]

Securities Docket has obtained a copy of Kellner v. Madoff, belived to be the first class action filed against Bernard Madoff, his firm, and others related to an alleged $50 billion Ponzi scheme.  The complaint largely tracks the information asserted in the SEC and DOJ filings last week with respect to the details of the […]

Senate Banking Committee Chairman Christopher Dodd is seeking an explanation from the SEC as to why it failed to detect Bernard Madoff’s $50 billion Ponzi scheme. Bloomberg reports that Dodd has requested information from the SEC about the case. Dodd’s spokesperson, Kate Szostak, stated yesterday that “Senator Dodd is concerned not only about the people […]

The Madoff-related loss by the nationalized Dutch arm of Fortis could be €850m-€1n, Fortis Bank Nederland said yesterday.  FT Alphaville reports that Fortis Bank had been lending to funds which invested with Madoff. The possible loss to Dutch taxpayers works out to €51-€60 (US$70-US$80) for every man, woman and child in the country, according to […]

London-based Madoff International, which had attempted last week to clarify that it was not a part of US asset management company Madoff Investments, ceased trading yesterday after holding discussions with the UK’s FSA yesterday.   The Telegraph reports that Mr. Madoff owns 88 percent of Madoff International, “which takes no client money and works as a […]