Bernard Madoff provided the SEC with a list of his personal assets Wednesday, meeting a court-ordered deadline of Dec. 31.  The AP reports that the SEC confirmed receipt of the list on Wednesday, but the SEC declined to reveal details or make the documents available to journalists. The list was not filed publicly in any […]

In Australia, the value of securities class actions led by litigation funder IMF has tripled since 2007, increasing from $400 million in 2007 to more than $1.2 billion at the end of 2008. The Australian reports that IMF now has seven securities actions under way: Sons of Gwalia, Ion, Aircargo, Centro, Westpoint, AM Corporation and […] 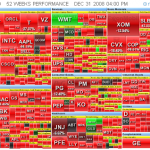 Finviz.com has a host of interesting charts and tools on its website, including customizable market maps such as the one below. The sad sea of red below reflects the performance of the stocks in the S&P 500 in 2008.