We’ve seen this movie before, but two members of Congress, Louise M. Slaughter (pictured) and Brian Baird, are once again sponsoring the “Stop Trading on Congressional Knowledge Act” that would prohibit Congress and their staffers from using nonpublic information obtained through their official positions to benefit themselves financially.  This is the third year in a […] 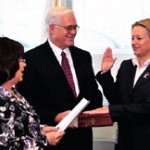 The SEC announced today that Mary L. Schapiro was sworn in this morning as the 29th Chairman of the SEC. The oath of office was administered by SEC Commissioner Elisse B. Walter at SEC headquarters. “Seventy-five years after this great agency was founded, the SEC must play a critical role in rebuilding investor confidence, reviving […]

Halliburton Co. has agreed to pay a $559 million fine to end an investigation of its former KBR Inc. unit for charges of bribery.  Reuters reports that the the DOJ and the SEC must still provide final approval of the settlement, the largest penalty against a U.S. company for charges of bribery under federal law.  […]

The Senate Banking Committee’s hearing on the “Madoff Investment Securities Fraud: Regulatory and Oversight Concerns and the Need for Reform” is underway and can be viewed live at the link in this post.