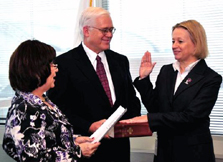 The SEC announced today that Mary L. Schapiro was sworn in this morning as the 29th Chairman of the SEC. The oath of office was administered by SEC Commissioner Elisse B. Walter at SEC headquarters.

“Seventy-five years after this great agency was founded, the SEC must play a critical role in rebuilding investor confidence, reviving our markets, and rejuvenating our economy,” said Chairman Schapiro. “I’m honored and grateful to be entrusted with leading this agency during such an important time – when the SEC must effusively be the investor’s advocate.”

Chairman Schapiro was appointed by President Barack Obama on Jan. 20, 2009, and unanimously confirmed by the U.S. Senate.  She is the first woman to serve as the agency’s permanent Chairman.

One response to “Mary Schapiro Sworn In as SEC Chairman”