“Madoff Case Global Alliance of Law Firms” Meeting: A Seat at the Table 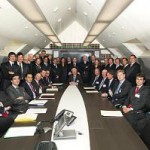 Two days ago, on Tuesday, February 17, 2009, the first meeting of what is being called the “Madoff Case Global Alliance of Law Firms” took place in Madrid, Spain.  It was attended by approximately 40 lawyers from over 20 different countries, as well as at least one non-lawyer from the U.S. named Charles Grice.

We spoke with Grice shortly after his return to the U.S. from Madrid yesterday about the details of the meeting, and his take on the Global Alliance, its goals, and its prospects for success.  Get the full details in this post on my Enforcement Action blog over at Compliance Week.