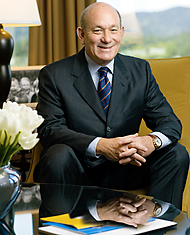 Bruce E. Karatz, the former CEO of KB Home, has been indicted and charged with 20 counts of defrauding the Los Angeles homebuilder and its shareholders by awarding himself and others with millions of dollars worth of undisclosed backdated stock options.The NLJ reports that in the indictment returned on Thursday, Karatz is charged with concealing the backdated stock options for seven years from KB Home’s board of directors.

In addition, the indictment charges that when KB Home began investigating possible backdating in 2006, Karatz submitted false documents with the company’s audit committee and with its auditor, Ernst & Young, stating that there was “no evidence of the backdating of options or other manipulation by management,” the indictment says. These false documents ultimately caused KB Home to make inaccurate filings with the SEC, prosecutors allege, forcing the company to later restate a 2006 quarterly report to reflect more than $36 million in additional non-cash compensation expenses.

NLJ reports that Karatz’s attorney, John Keker, issued a statement on Thursday that “we are disappointed that during this economic collapse the government chooses to waste its resources on backdated options, an issue that has long ago been fixed at KB Home and generally in the corporate world. But since they made that choice, we will show a jury that Bruce Karatz, who as CEO helped create 5,000 jobs and oversaw significant company growth, acted appropriately.”