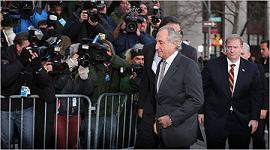 After pleading guilty in federal court today as expected, Bernard Madoff had his bail promptly revoked by U.S. District Judge Denny Chin and was sent off to jail pending sentencing.

At the hearing in a packed Manhattan courtroom, Madoff admitted that he ran a Ponzi scheme for many years in his firm’s investment advisory business.   According to the American Lawyer, which “live-blogged” the proceedings, Madoff stated in court that:

The WSJ reports that Madoff will now likely spend the rest of his life in prison, as he faces charges carrying a maximum of 150 years in prison.  His sentencing is set for June 16.