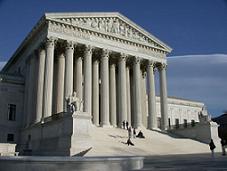 The U.S. Supreme Court heard argument today in the case of former Enron VP Scott Yeager, who was was acquitted of conspiracy, securities fraud and wire fraud charges after a 13-week trial in 2005. The jury deadlocked on charges of insider trading and money laundering. The Houston Chronicle reports that prosecutors have sought a second trial on those deadlocked counts, but Yeager argues that a retrial would violate the constitutional ban on double jeopardy.

According to the Chronicle, the Supreme Court justices appeared quite skeptical of the prosecutors argument. “I can’t think of any reason for allowing the government a second bite at this apple,” Associate Justice Steven Breyer said during oral arguments in the case today.

The Chronicle further reports that “if the jury had hung on all of the counts against Yeager [in 2005], it would have been constitutional for prosecutors to retry him on the charges…. The legal uncertainty in Yeager’s case comes from the jury’s split verdict — deadlocking on almost all of the more than 120 counts against him, while simultaneously finding him not guilty of six counts.”

On behalf of the government, Deputy Solicitor General Michael Dreeben argued that “the government should have one full and fair opportunity to convict a defendant.  That does not occur when the hung counts prevent” a full verdict on some charges.

Other justices were also reportedly skeptical of the government’s argument: