Here is the weekly summary for Securities Docket’s Web Watch (”This Week’s Best Blog Posts and Columns”): SCOTUSBLOG (March 27, 2009): Argument Recap: Yeager v. US At Monday’s oral argument in Yeager v. United States, the Supreme Ct. wrestled with claims of double jeopardy by a former Enron VP. THE RACE TO THE BOTTOM (March […] 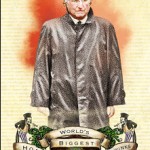 The Topps Company, known for decades for its baseball cards, will be issuing a series of 2009 trading cards this summer featuring the “world’s biggest hoaxes, hoodwinks and bamboozles.”  Among those featured in this set will be Bernard Madoff, Charles Ponzi, The Runaway Bride, and Enron.  According to Topps, “these cards feature 20 perpetrators of […]

Aon Benfield has developed a $1.8 billion best estimate of direct insurance losses that could be paid out on behalf of asset management firms, banks and other firms being sued as a result of the Madoff scandal.  Stephen Mildenhall, head of Aon Benfield’s Actuarial and Enterprise Risk Management practice, stated at the Professional Liability Underwriting […]

Stephen Harbeck, president of the Securities Investor Protection Corp., has now stated that the $2.6 billion SIPC has on hand is enough to satisfy all legitimate claims by victims of Bernard Madoff’s Ponzi scheme. Bloomberg reports that Harbeck’s position is based on a formula with which Madoff investors take great issue. SIPC’s decision, first announced […]

In the UK, Christopher McQuoid, former general counsel of TTP Communications, and his father-in-law, James Melbourne, were both found guilty on one count of insider dealing by the Southwark Crown Court.  The case marks the first criminal conviction for insider trading ever obtained by the UK’s Financial Services Authority (FSA), the Times Online reports. The […]

Former U.S. attorney John Wood has joined law firm Hughes Hubbard & Reed as a partner in the firm’s Washington, D.C. office. The firm announced that Wood has joined its White-Collar Criminal and International Anti-Corruption Practices. For the past two years, Mr. Wood has served as the U.S. Attorney for the Western District of Missouri. […]

In Sweden, charges were filed on Friday against six men in what is believed to be the largest insider trading scandal in Swedish history. The Local reports that the six men are alleged to have made profits of approximately 130 million kronor ($16.3 million) through illegal insider trading. Prosecutor Stig Åström of the Swedish Economic […]