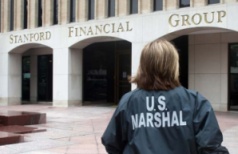 Laura Pendergest-Holt, Stanford Financial Group’s chief investment officer, filed a $20 million malpractice lawsuit on Friday against an outside lawyer for the company who accompanied her to SEC testimony on February 10.  Within days of the testimony, as discussed here, the lawyer had withdrawn from the case altogether and Pendergest-Holt had been both sued by the SEC and arrested by the FBI for obstructing the SEC’s investigation.

The Houston Chronicle reports that Pendergest-Holt has sued Thomas Sjoblom and his law firm for legal malpractice and breach of fiduciary duty. “He essentially dropped her in the grease,” said Pendergest-Holt’s lawyer, Tony Buzbee.  She claims that Sjoblom “caused Pendergest-Holt to speak to the SEC without informing her of her Fifth Amendment rights against self-incrimination, that she was not required to testify, that she had no attorney-client privilege with him and that the interests of her employer were adverse to her interests.”  She further alleges that Sjoblom was acting for Stanford Financial Group Chairman R. Allen Stanford and his companies and did not represent her individual interests.