Web Watch: Best Blog Posts and Columns For the Week Ending May 15

Here is the weekly summary for Securities Docket’s Web Watch (”This Week’s Best Blog Posts and Columns”): GLOBAL GLIMPSES (May 15, 2009): Europe Rules Out “No Comment” on Leaks European companies could find it harder to deflect media reports and market rumors with a blanket “no comment” under new guidance from securities regulators. STEVEN M. […]

Another defendant has pleaded guilty in the “Golden Goose” insider trading case.  Frederick Bowers, a former salesman at Lehman Bros., pleaded guilty yesterday to federal charges that he traded on stock tips gleaned from the wife of his colleague, Matthew Devlin.  Bloomberg reports that Bowers pleaded guilty to conspiracy and securities fraud and agreed to […]

On May 14, the SEC filed a settled enforcement action against Gary A. Ray, the former VP of human resources at L.A.-based homebuilder KB Home, Inc., alleging that Ray used hindsight to pick advantageous grant dates for KB Home’s annual stock option grants in order to enrich himself and others at KB Home. The SEC […] 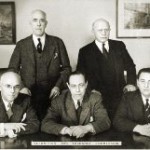 James W. Barratt, managing director at Alvarez & Marsal, has been elected as the 2009-10 president of the Securities and Exchange Commission (SEC) Historical Society.  The position will take effect on June 1, 2009. “I am honored to be elected to lead the SEC Historical Society,” said Mr. Barratt, who serves in A&M’s Dispute Analysis […]

CBS News reports in this video on two attorneys at the SEC who are reportedly under “active” criminal investigation by the FBI for trading stocks based on inside information. CBS reports that the accusations against the two lawyers – a man and a woman whose names have not been released – are detailed in a […]

Morgan Keegan & Co. Inc., a subsidiary of Regions Financial (RF), disclosed this week in RF’s Form 10-Q filing with the SEC that the SEC staff issued it a Wells Notice in March indicating that it intends to recommend enforcement action to the Commission. According to RF, In March 2009, Morgan Keegan & Company, Inc. […]