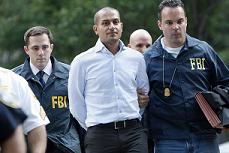 If you can’t trust a “crooked Wall Streeter … accused of placing investors’ money in risky mortgage securities without their permission” who can you trust?

Julian Tzolov, a former Credit Suisse broker who has been charged criminally for defrauding his clients and has been on house arrest, failed to return to his Fifth Avenue condominium on May 9, and is now a fugitive.  His disappearance means that he has now created two more victims: two friends of his who put their homes up as bail for Tzolov.

“angrily ordered prosecutors to seize $3 million in assets that were posted as bail for [Tzolov], including a friend’s Manhattan apartment and a Miami Beach home belonging to his girlfriend’s brother.”

“Everything should be forfeited,” Weinstein said yesterday in reference to the friends who signed Tzolov’s bail bond. “They’re going to lose everything.”