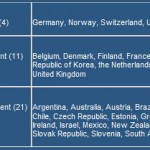 In a report published Tuesday, June 23, Transparency International states that the majority of the world’s leading exporting countries are failing to fully enforce the OECD Anti-Bribery Convention to which they are party. TI’s report shows that only four out of 36 countries evaluated are actively enforcing the Convention, and that there is moderate enforcement […]

MSNBC reports that the government pulled out all the stops — orange jumpsuit, handcuffs, perp walk — to make Allen Stanford look bad as he appeared in court in Texas today. Stanford’s response: keep smiling.

Saudi Arabia’s Capital Market Authority has fined billionaire Mohammed bin Ibrahim bin Mohammed al-Issa, an investor and shareholder in several listed companies, for insider trading. The CMA fined Issa 100,000 riyals ($26,667) after an appeal affirmed a ruling that Issa conducted “insider trading in shares of Saudi Hotels Co based on his membership of the […]

Fighting the SEC’s Demand for an O&D Bar

Back in July 2008, we discussed an emerging tactic in the defense of SEC enforcement actions: settling the case against you in all respects except for the issue of the SEC’s demand for an officer and director bar, and litigating the bar issue. A case decided yesterday shows that not all defendants adopting this strategy will be successful in avoiding an O&D bar.