Although a magistrate judge granted Allen Stanford’s bail request last week, U.S. prosecutors view him as a serious flight risk and will ask a federal judge today to revoke the $500,000 bail. CNBC reports that last week, U.S. Magistrate Judge Frances Stacy said that Stanford may go free on bail provided he comes up with […]

Bernard Madoff’s wife, Ruth Madoff, broke her silence today on her husband’s massive Ponzi scheme.  Her statement follows below: I am breaking my silence now, because my reluctance to speak has been interpreted as indifference or lack of sympathy for the victims of my husband Bernie’s crime, whichis exactly the opposite of the truth. From […]

The Full Monty: 150 Years for Madoff

Maybe we should rename it “The Full Bernie?” 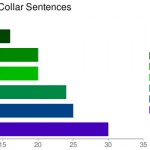 DealBook has a good post summarizing some of the recent white collar sentences for defendants in the financial area. It shows that while Madoff faces up to 150 years in prison, 30 years is the high-end of what other defendants have received. Read the DealBook article

Poll: How Much Prison Time Will Madoff Receive?

Bernard Madoff, age 71, will be sentenced today, and may receive up to 150 years in prison. His lawyers have requested a sentence of 12 years. What do you think the sentence will actually be? Please take our poll.