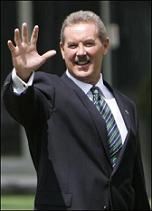 Although a magistrate judge granted Allen Stanford’s bail request last week, U.S. prosecutors view him as a serious flight risk and will ask a federal judge today to revoke the $500,000 bail. CNBC reports that last week, U.S. Magistrate Judge Frances Stacy said that Stanford may go free on bail provided he comes up with $100,000 for a cash bond, lives with his girlfriend in a Houston high-rise apartment and wears a tracking device.

Prosecutors have appealed that order, asking U.S. District Judge David Hittner to review the matter. Hittner has ordered Stanford held in custody until today’s hearing, when he will consider whether to revoke the magistrate’s release order.

One response to “Prosecutors Appeal Grant of Bail to Stanford, Call Him “Flight Risk””