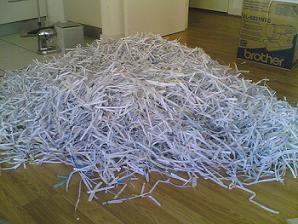 Some lucky person or persons in the federal prosecutor’s office will apparently have responsibility for “re-assembl[ing] the contents of three bags of shredded documents” that are sought as evidence in the R. Allen Stanford case.  Don’t worry, though, it should only take about two months.

Bloomberg reports that federal prosecutors told U.S. Magistrate Judge Barry Seltzer yesterday that within the next two months they will have completed the task of piecing back together the contents of the bags.  The shredded evidence will reportedly “initially be used against Bruce Perraud, a former Stanford Financial Group security specialist who is charged with destroying documents after an investigation began.”

Read the Bloomberg article (via Dealbreaker)

One response to “Lousy Job of the Week: Piecing Shredded Documents Back Together”