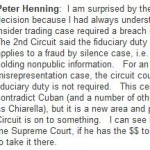 Yesterday in SEC v. Dorozhko, the Second Circuit reversed a lower court that had ruled that computer hacking was not “deceptive” within the meaning of Section 10(b), as defined by the Supreme Court.

Today, Wayne State University law professor Peter Henning and I hashed through the various issues raised in an earlier post about “Hot Tips, Twitter and Insider Trading” in an online discussion. We also explored the recent Mark Cuban decision, the 2nd Circuit’s opinion yesterday in the Dorozhko case, and the bill now before Congress that would prohibit Congressional insider trading. Check it all out here. 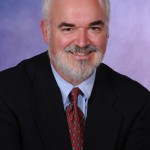 I took a shot yesterday at answering my own hypothetical questions involving insider trading liability for tips and trading related to Twitter “tweets.” Recognizing that I was grasping for answers and that I clearly needed to bring in heavier artillery, I reached out to Peter Henning, a law professor and frequent blogger for the New York Times’ DealBook on securities law issues. Peter graciously agreed to help me get to the bottom of these questions, and we will attempt to do that tomorrow in an online chat here at Securities Docket at 1 pm Eastern.

Roger R. Crane has joined law firm K&L Gates as a partner in its New York office. The firm announced this week that Crane has joined its commercial disputes practice. Crane joins K&L Gates from Nixon Peabody LLP, where he was leader of the business litigation team. Crane told the NYLJ that he joined K&L […]