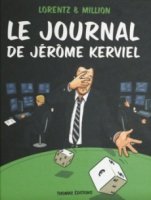 In Paris today, former Societe Generale trader Jerome Kerviel, blamed by SocGen for close to 5 billion euros (US$7.2 billion) in losses, was ordered to stand trial.  Reuters reports that his lawyer, Olivier Metzner, confirmed that Kerviel had been charged with fraud and breach of trust, amongst other things.

In June, French prosecutors recommended to the court that Kerviel be tried for abuse of trust, falsifying documents and computer hacking.