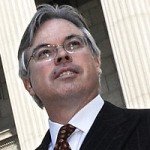 James Treacy, the former president of Monster Worldwide, has been sentenced to two years in prison following his conviction for fraud in an options backdating scheme at the company.  The WSJ Law Blog reports that U.S. District Judge Jed Rakoff sentenced Treacy to 24 months in prison and ordered him to pay $6.3 million in restitution and $6.3 million in forfeiture.

Treacy was convicted in May 2009 of conspiracy and securities fraud.  Prosecutors alleged that he made more than $24 million in a scheme in which he and the company’s former CEO “gamed the system” with improperly backdated stock options.