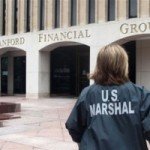 Tom Raffanello, the former chief of the U.S. Drug Enforcement Administration’s Miami office, was indicted yesterday by a federal grand jury for ordering the shredding of records belonging to Allen Stanford.  The Miami Herald reports that Raffanello left the DEA five years ago to become Stanford’s local security chief.  He is charged with “ordering workers to destroy thousands of documents just days after government agents shut down the banking empire in a massive fraud case.”

The Herald reports that according to prosecutors, the records were hauled away from the company’s security bunker in Fort Lauderdale after a federal judge ordered that no company paperwork be destroyed.