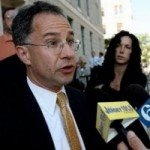 Paul Fishman has been confirmed by the Senate Judiciary Committee as New Jersey’s next U.S. Attorney.  The New Jersey Star-Ledger reports that Fishman replaces Ralph J. Marra, who has been acting U.S. Attorney since Chris Christie stepped down to run for governor.

Fishman previously served for 11 years as an assistant U.S. Attorney in New Jersey and was chief of the office’s criminal division.  He is currently a partner at the New York law firm of Friedman, Kaplan, Seiler & Adelman.