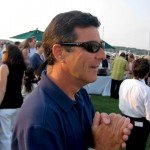 Federal prosecutors in Manhattan have reportedly made a new request seeking bail for Frank DiPascali Jr., a key colleague of Bernard Madoff. DiPascali has been in jail since August, when over the objections of the government, U.S. Judge Richard J. Sullivan (SDNY) refused to release DiPascali on bail. A detailed discussion of the August hearing is available here.

The New York Times reports that

DiPascali would also be required to wear an electronic device that would plot his location by satellite, and could not leave his home without an escort from the FBI.