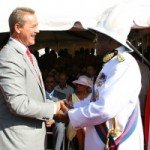 The Houston Chronicle reports that the panel that approves candidates for knighthood in the Antigua and Barbuda has voted to rescind the title granted to Stanford in 2006. The vote was unanimous.

Jacqui Quinn-Leandroly, chairwoman of the National Honors Committee said the panel took the action “because of the embarrassment Stanford caused the country with the alleged Ponzi scheme he ran from his Antigua-based offshore bank.” The country had never before revoked knighthood.