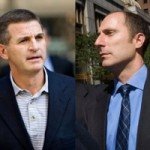 Today, a jury in the Eastern District of New York found two former Bear Stearns hedge fund managers not guilty of fraud charges.  The NY Times reports that Ralph R. Cioffi and Matthew M. Tannin were acquitted of charges that they lied to investors when they presented “an upbeat financial picture without disclosing that the two hedge funds they managed were plummeting in value and that Mr. Cioffi had already pulled some assets from one.” Cioffi was also found not guilty of insider trading charges.

Prosecutors claimed the alleged fraud cost 300 investors about $1.6 billion. The defense argued, however, that Cioffi and Tannin were themselves victims of the financial crisis and managed their investors’ money the best they could.