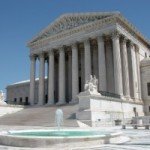 The U.S. Supreme Court today agreed to review a shareholder case against National Australia Bank Ltd. that presents the issue of the reach of U.S. securities laws overseas. Bloomberg reports that the Supreme Court will review the Second Circuit’s decision from earlier this year that the lawsuit filed by Australian stockholders of NAB was beyond the jurisdiction of U.S. courts.

According to the SCOTUSBlog, the Court granted review even though the U.S. Solicitor General had urged it to bypass the case.

The NAB case will be one of the most watched of the coming term. The U.S. Chamber of Commerce and the Securities Industry and Financial Markets Association filed briefs when the dispute was before the 2nd U.S. Circuit Court of Appeals in New York, and a barage of amicus briefs on the subject is almost certain. Indeed, in our July 9 “Mid-Year Review” webcast, Lyle Roberts’ “bold prediction” for the second half of 2009 was that the Supreme Court would grant review in the NAB case, which would then “lead to a record number of amicus briefs in a securities law case.”