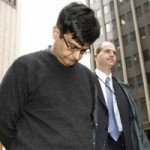 Anil Kumar, a former senior partner and director at McKinsey & Co., admitted yesterday to making $2.6 million as a tipster for Raj Rajaratnam of Galleon Group. The Washington Post reports that Kumar pleased guilty to tipping Rajaratnam about the acquisition of ATI Technologies Inc. by Advanced Micro Devices Inc. in exchange for over $1.7 million, including a $1 million bonus after the ATI and Advanced Micro Devices deal was announced.

Additionally, Kumar allegedly told Rajaratnam that eBay Inc. planned to announce substantial layoffs in 2008. Rajaratnam then sold borrowed shares and made a $500,000 profit when the layoffs were announced.

Kumar plead guilty to securities fraud and is cooperating with the government in an effort to reduce his potential 25-year prison sentence.