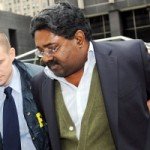 Lawyers for Raj Rajaratnam returned to court this week in an attempt to reduce the Galleon Group founder’s bail from $100 million to $20 million.  Prosecutors, however, argued that the reduction should be denied because the defendant is a flight risk. U.S. District Judge Richard Holwell sided with the prosecutors, ruling that “the conditions of bail should be onerous.” A similar effort in November to reduce his bond also failed.

The court did find, however, that Rajaratnam could remain on bail and out of prison until his trial, which could begin as soon as June.