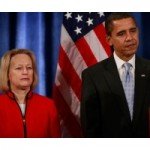 According to the spending plan, the extra funds are to help the agency improve technology and hire staff with expertise in financial products. The SEC intends to “adequately staff” its unit that investigates fraud to “address increasingly complex financial products and transactions.” The SEC’s number of full-time employees would reportedly increase 10 percent to 4,200 by October 2011 if the agency gets the full $1.26 billion.

Bloomberg reports that Obama’s fiscal 2011 request shows lawmakers are pursuing increases in funding after agency officials said flat budgets during the Bush administration made it difficult to keep pace with innovations on Wall Street. Congress has already approved $1.11 billion in spending for the SEC in the fiscal year that ends Sept. 30, 2010.

SEC Chairman Mary Schapiro in November urged Congress to let her set the agency’s budget based on fees it collects from the financial industry. So-called self-funding would enable the SEC to boost staff as needed, Schapiro said.

Obama’s plan would also boost funding for the CFTC by 55 percent to $261 million.