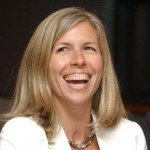 Unger was named a Commissioner of the SEC in November 1997 and served until February 2002. She was named Acting Chairman of the agency from February 2001 to August 2001.