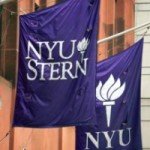 Should a person convicted of insider trading be allowed to hold an Masters in Business Administration from one of the nation’s most prestigious universities? New York University apparently thought not, and is now being sued for its decision to revoke the MBA of one of their former students.

Ayal Rosenthal, 29, was convicted three years ago of leaking confidential information while working as an accountant at PricewaterhouseCoopers and studying part time at NYU.

According to the New York Post, Rosenthal has brought a breach of contract claim against the university for being ‘excessive and unfair’ in its decision to revoke the MBA and for failing to provide him with a ‘fair and timely hearing’.

Rosenthal, 29, is the youngest son of Zvi Rosenthal, who was charged along with his three sons (including Ayal) of insider trading in 2007. According to the SEC release regarding the charge, the scheme netted more than $3.7 million over four years.