UK: FSA Chief to Step Down After Election 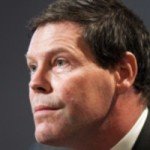 UK Financial Services Authority (FSA) Chief Hector Sants has announced his intention to step down as head of the financial regulator.

His departure comes amid opinion polls indicating that the opposition Conservative Party is likely to win the next general election. The Conservatives have called into question the future of the FSA and have indicated an intention to abolish the agency and hand its banking supervisory powers to the Bank of England.

Both Sants and FSA Chairman Adair Turner have publicly criticized Tory plans to overhaul the country’s regulatory system in the middle of the financial crisis, warning it could mean losing valuable lessons learned over the past two years.

Reuters reports that the FSA will announce a succession process in due course. Key candidates for the post reportedly include Sally Dewar, current head of the regulator’s Risk Business Unit, and Jon Pain, head of supervision at the FSA.